The simplest definition of a wholecloth quilt is a quilt made of a single piece of fabric and quilted, making the quilting itself the design. There is no patchwork or appliqué work on a traditional wholecloth quilt.

Wholecloth quilting originated in Wales, Northern England and the Scottish Borders and was very popular in the 19th and 20th century.

Early whole cloth bed quilts which may appear to be a solid piece of fabric are actually composed of strips of fabric, since early looms could not produce widths of cloth large enough to cover an entire bed surface. These early quilts even if they are made from strips of the same fabric, be it wool or cotton, are referred to as wholecloth quilts.

As with current quilts, early quilts were made of three layers, a top, a filling and backing, the filling in this period could be cotton or made from an old blanket, and was often wool in Wales. The layers were quilted by hand forming intricate decoration and design.

In America, wholecloth quilts emigrated with families resettling there, or were imported by the wealthy. In the late 19th and early 20th century wholecloth quilts enjoyed a heyday. British quilters were more likely to work individually on a single piece, whereas in America, it became traditional for women to gather in a family or social group to work communally on a single quilt.

By the late 19th century it is possible to differentiate between, Welsh, North Country and Scottish Border quilts based on the design elements. For example, Welsh quilts can easily be recognised from the inclusion of spiral motifs; paisleys, fans, hearts and leaves are also common in Welsh quilting. The layout usually has a large circular central motif, and two or three borders, with the different areas separated by double straight lines. 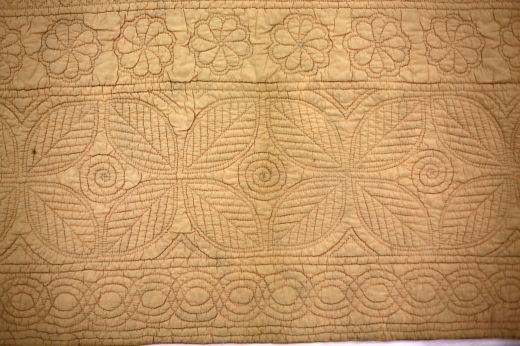 Two popular techniques which are closely related to wholecloth quilting are Trapunto and Cording. Trapunto is an Italian word used to describe the technique of slipping extra stuffing into certain areas of a quilt to create areas of raised motifs, whereas cording involves stitching channels and then inserting cords to create a raised shape. One of the earliest examples of cording is the medieval Tristan Quilt, held by the V&A in their collection.

Wholecloth quilting is enjoying a revival today and proving to be very popular, not just for quilt tops but for cushions and hangings. Today wholecloth quilts are more commonly machine quilted, regularly with free machining. However, they still follow the same principles of three layers and being made of one piece of cloth.

Many retailers sell quilt tops with a quilting pattern printed on it so you can follow the design to easily make your first whole cloth quilt, but if you would like to do it the more traditional way there are a few things to remember.

When choosing your fabric ensure it is firm and has a fairly tight weave so that the quilting stitches can be seen and be sure to pre-wash to avoid shrinkage once quilted. Cut your wadding (batting) an inch larger all round than the size of the quilt. This is because the stitching will pull up the wadding to a certain extent.

Your choice of thread can make the design of your whole cloth quilt. In the quilt featured below a heavy thread is used in a variety of colours, metallic and variegated to demonstrate the completely different styles that can be gained by the thread choice. 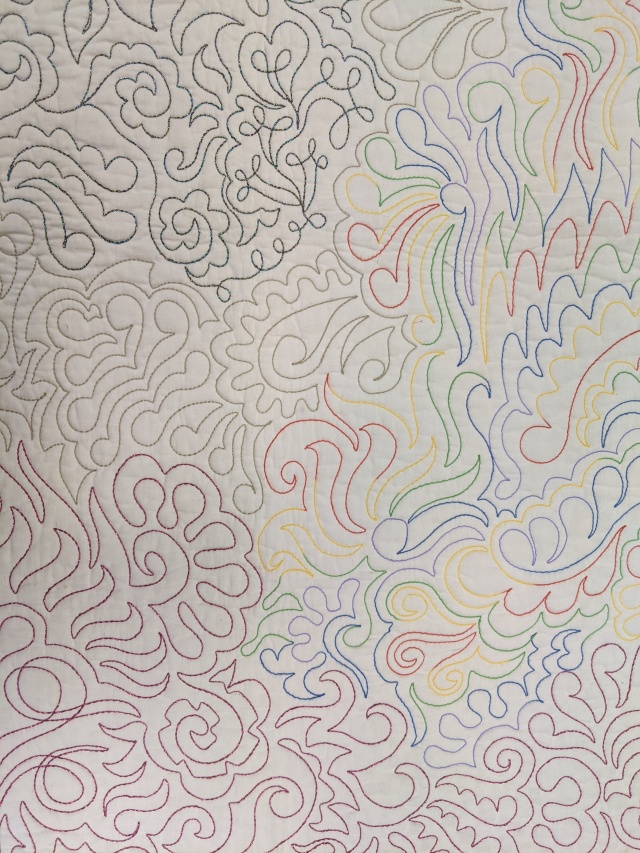 Mark the quilting design on the top layer. This can be done by marking with a marker pen or pencil and use a glue basting spray to join your three layers together.

The most important thing in making a whole cloth quilt is that you work from the centre both when basting/pinning and when quilting.