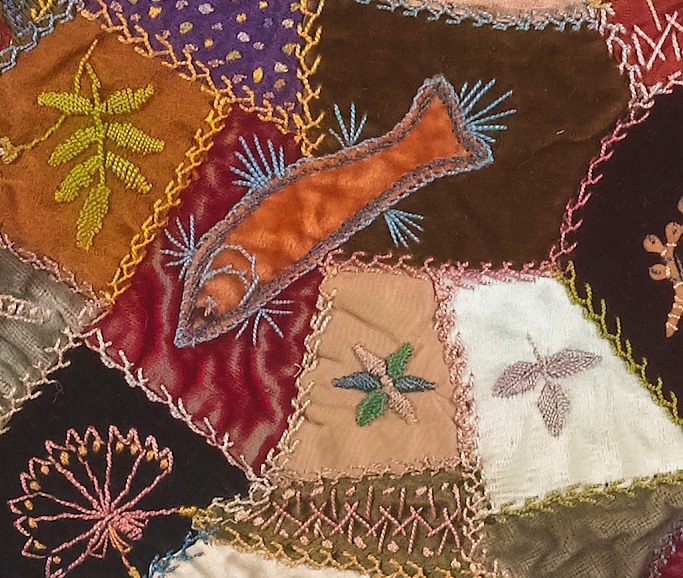 An unusual theme, but one that popped into our curator’s head whilst coming up with new ideas for how to share The Collection. She has found five quilts that feature fish, so, here we go!

We’ll start with the dancing fish in this Nineties Collection piece called Dance with Flute by June Thorpe. The fish figures come from Mimbres pottery designs (A.D. 1000-1130) and the animals movements are suggested by the curved piecing. The fabrics are hand-dyed and pieced, applied and embroidered by machine, with some hand-stitching. It was commissioned and presented by Region 3 (Hampshire, Wiltshire, Channel Islands and Isle of Wight) for the Nineties Collection, in 1999.

Fish out of water by Pauline Burbidge, was made in 1991, when the artist was working on free-form shapes in contrast to hard-edge geometric forms. Inspired by the boldness of Matisse’s paper cut-outs, the artist made paper collages which then translated into fabric collages, using fabric glue to paste down shapes before stitching. The work was quilted on an industrial quilting machine owned by a Nottingham company called Harveys, which was hired in their quiet period of production. Several quilt tops were prepared and stitched together in one length, and fed into the quilting machine treating them as one long length of cloth. The ‘Fish out of Water’ images came from a still life study of striped fabric, a coffee jug and a fish shaped pencil box. The artist made many studies of the same image, which made a type of repeat pattern, but each block is an individual study in itself. This piece was donated to The Quilters’ Guild Museum Collection by the artist (an unprecedented honour) in celebration of The Quilters’ Guild’s 40th anniversary in 2019. 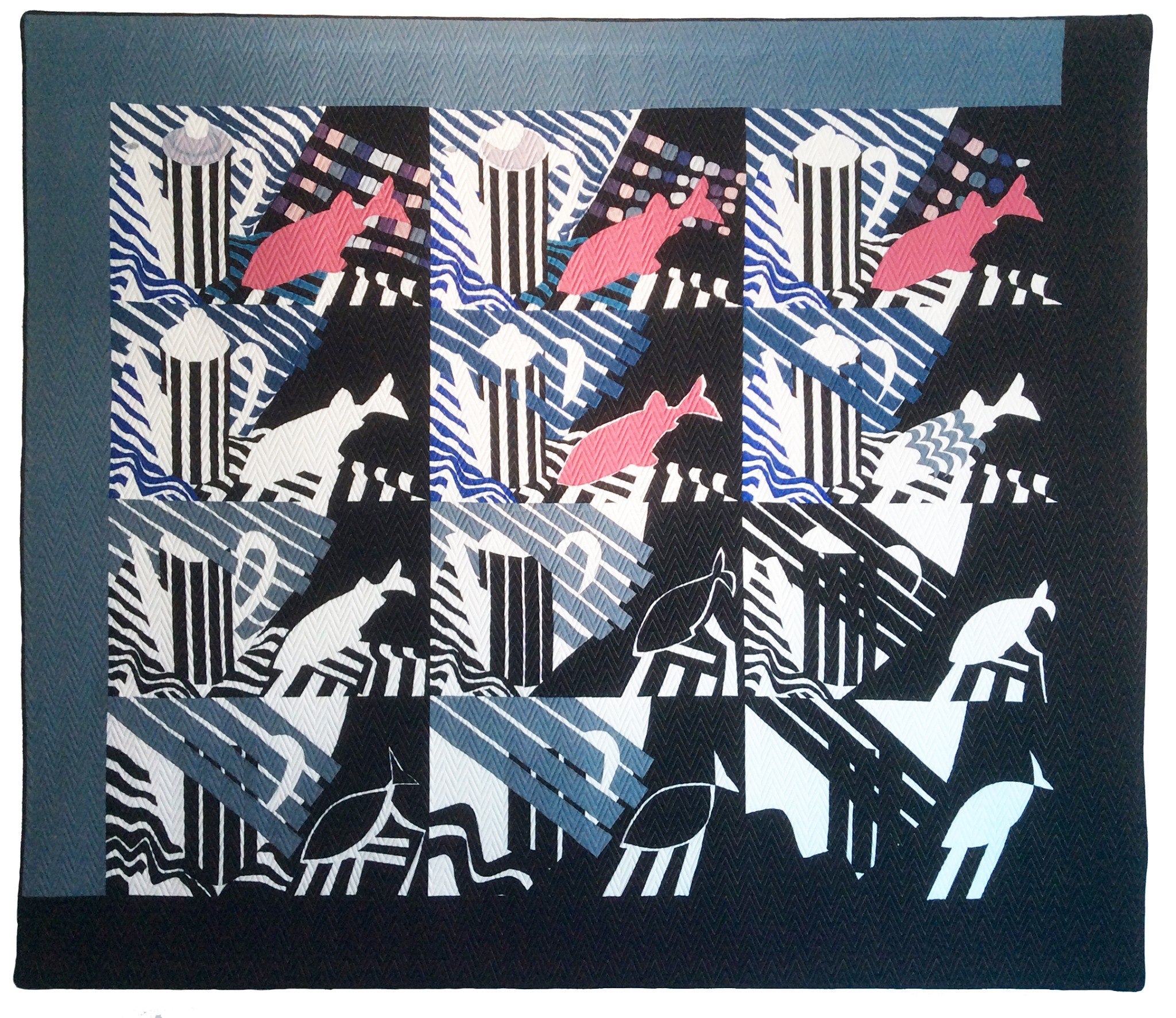 This small orange fish is part of the applied decoration on a small Victorian Crazy Patchwork piece dating from 1886. Other patches have also been elaborately embroidered with a range of stitches to create different patterns and motifs, including anchors, flowers, and games such as croquet. Some of the patches also have applied motifs and sequins. 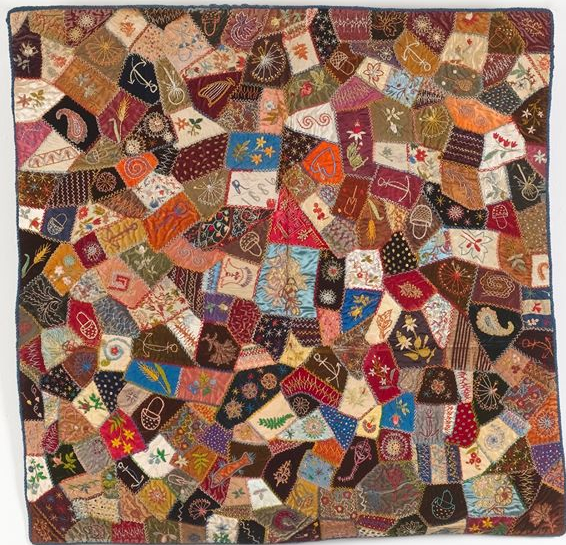 This beautiful quilt by Irene MacWilliam was made in 1994 and is simply entitled ‘Fish’. It is made from silk and has been machine-pieced and machine-quilted. It follows two years of the artist making quilts and embroideries about the sea, fish and the fishing industry. Commissioned and presented by Region 17 (Northern Ireland) for the Nineties Collection.

These fish feature on one piece of ’40 endangered in 40′ by Melanie Missin-Keating, made for the Forties Collection in 2019. The quilt uses strips of joined rectangles that feature digitally printed image and text of animal and plant species that are currently endangered and facing extinction. 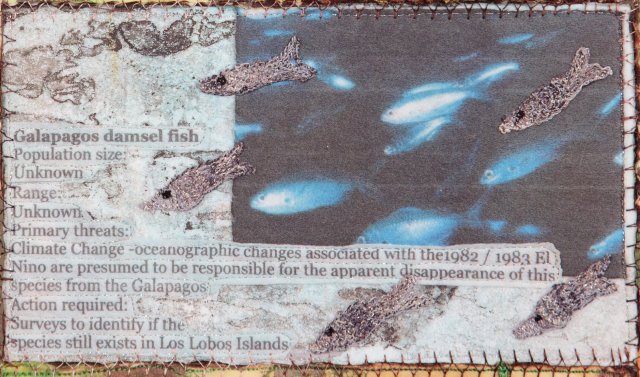 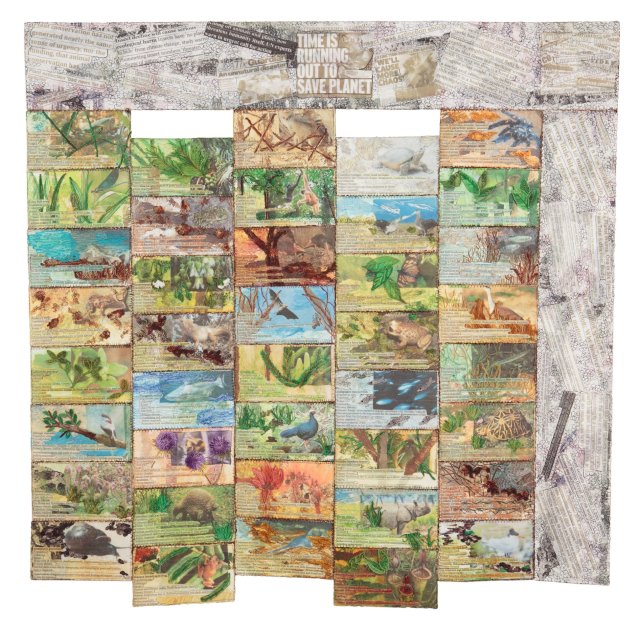