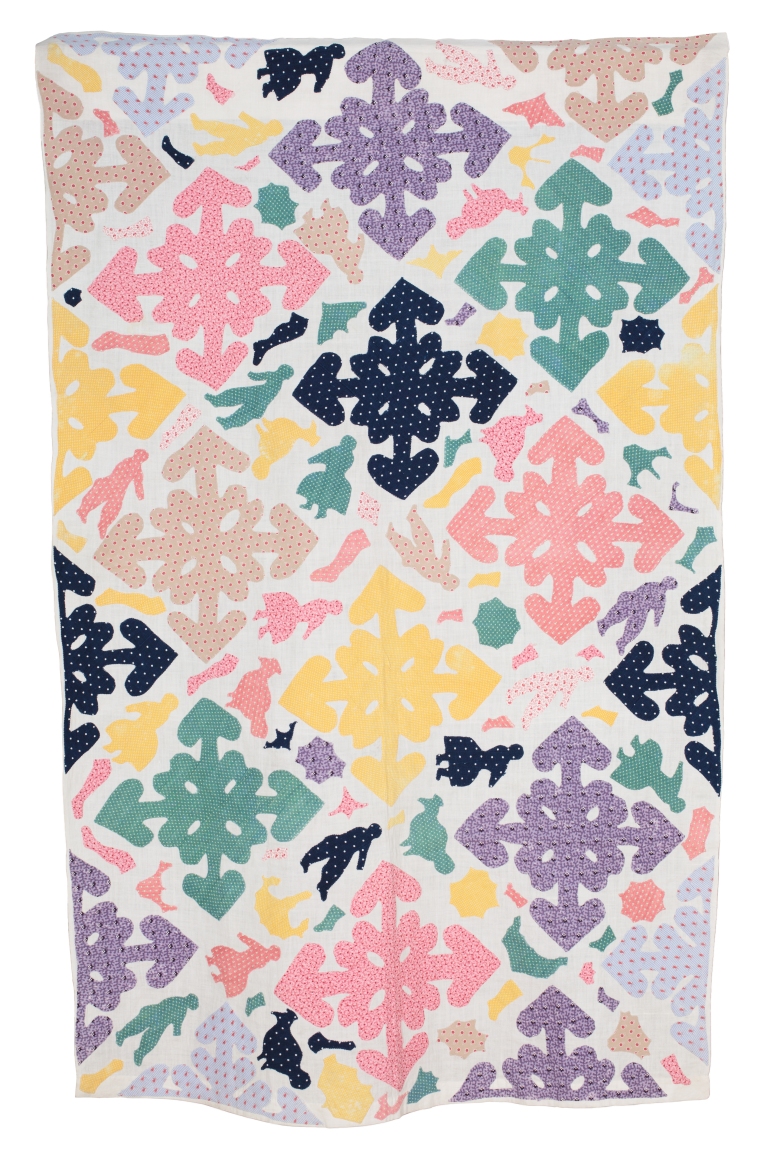 How do we define appliqué? Basically it is applying a shaped piece of fabric to a base fabric. On hearing this, many of us will conjure up a picture of the iconic red and green quilts or Baltimore quilts so well known in the United States.

Dinah Travis in Quilt Treasures wrote that “appliqué is the most creative of all the patchwork techniques. It allows complete freedom of expression…” Although known from medieval times, from about 1775 to 1860 specific motifs such as a bird or flower were often cut from a print and applied to a backing. Known as Broderie Perse this technique is still used today. The influence of Indian painted and printed chintz promoted the use of such small pictorial pieces for appliqué. 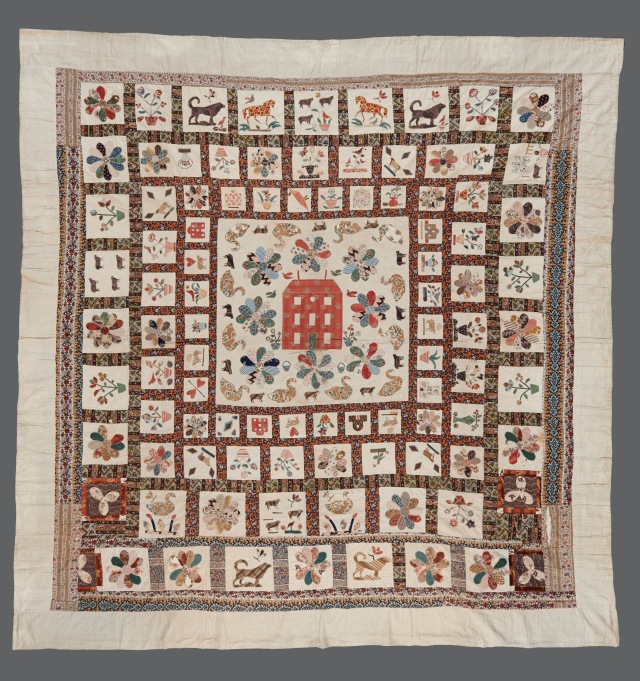 Red Manor House Coverlet, 1840-1860, Maker Unknown. Applique  Frame Coverlet with a central motif of a Red Manor House surrounded by flowers and domestic/rural animals. The subsequent frames are divided into squares, with each one containing a different applique motif including flowers, plant pots, animals and houses. Each appliqué motif has decorative herringbone embroidery stitch to cover the edges and each square is surrounded by a printed cotton border.

Appliqué often formed the central unit in a frame quilt. You may of course recognise such a quilt in the Red Manor House Coverlet which has been reproduced by The Guild in a simplified version as a Block of the Month pattern, and with the images being used on a selection of gift wares.

There were many other types of appliqué used as part of patchwork and on quilts. Everyday household shapes such as a cup, glove or fan were often cut from any fabric and applied as decoration. 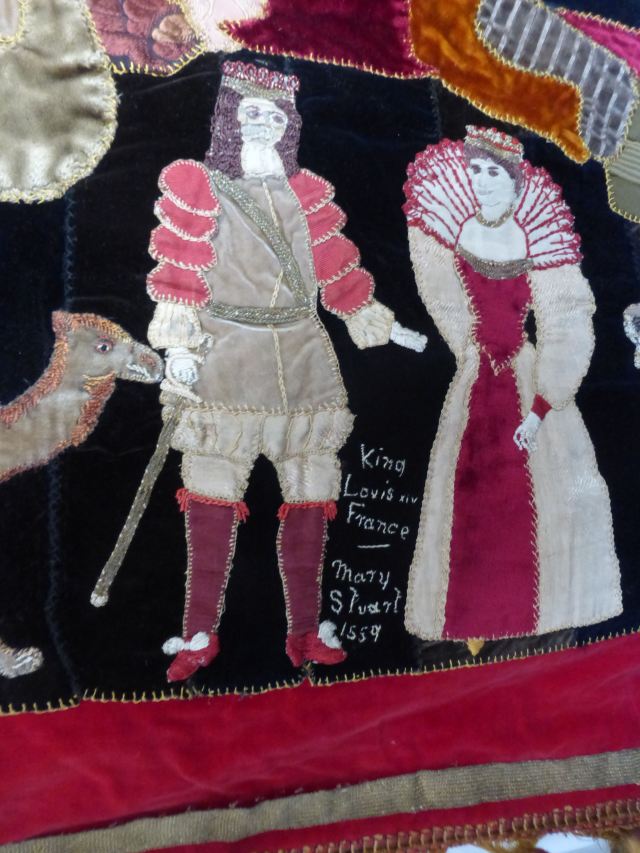 The Topsham Quilt, 1889, now in a private collection. Appliqué figures are used to decorate the quilt.

Complex images for appliqué, in particular figures and animals, appeared during Victorian times and these were used both on quilts but also as part of crazy patchwork.

North Country Applique Quilt,  1880-1890, Maker Unknown. Nine green and red cotton applique wreaths with leaves and flowers on a white cotton background, with an outer border of a winding stem with red flowers and green leaves. It has a frill around the outside and is densely hand quilted in a bellows design. The applique design is crudely stitched but the quilting stitches are very fine, suggesting there could be two makers.

It is interesting to see how the idea of using green and red applied shapes on a white backing became familiar both in this country as well as the U.S. Borders showing swags are seen in North Country quilts, as are shapes using a fold and cut method.

Applique Cot Coverlet, 1890-1900: Made by Mrs Routh. A cot coverlet made from colourful printed cotton shapes which have been applied to a single cotton sheet foundation fabric. The main shapes have been cut in the same way as a paper snowflake, using a quarter template placed on the folds of a square of fabric folded into quarters.

The Quilters’ Guild holds many examples of appliqué in their Museum Collection, many of which can be viewed online.

At the British Quilt Study Group’s annual seminar, as well as the presentation of academic papers, there are opportunities for members to exchange knowledge and information and talk about their own interests and work they have seen or questions they may have.

This year our seminar will be held in Darlington, and will include a visit to Bowes Museum to see items from their Collection.

Quilts from the Bowes Collection can be seen in North Country Quilts: Legend and Living Tradition, by Dorothy Osler, ISBN 0 9508165 2 3.